CPA prepares to run in his 50th race 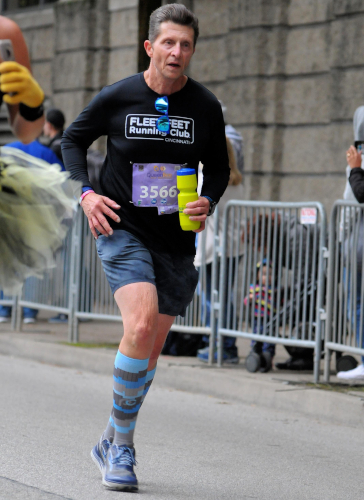 Running is often viewed as a punishment for athletes growing up. This was true for Gene Zackerman, CPA, until a corporate athletics event he participated in changed his perspective.

“One of the events was a 2,400-meter relay and six people each ran a 400, and it was brutal,” Zackerman said. “It was about 95 degrees out, but I survived it. After that someone in the office said, ‘Why don’t you run a half marathon?’”

Zackerman’s colleague told him he was already halfway through the training required of a half marathon. With that in mind, Zackerman decided to run the Cincinnati Half Marathon in fall 2010. After crossing the finish line, completing something he had never thought he would do, he said he felt mixed emotions. He gave himself a month – which would leave adequate time to train – to decide whether he would run a full marathon in the spring.

“But I was lying to myself, because I already knew I was going to do it,” he said.

His interest in running continued to pick up speed from there, and shortly after running his first full marathon at the Cincinnati Flying Pig in 2011, he joined a running group.

“The run family is unlike anything I’ve ever experienced,” Zackerman said. “It’s a supportive community and people genuinely care about each other.”

Now, after eight years of running, he will complete his 50th race Nov. 24 at the Cincinnati Hungry Turkey Half Marathon. Along with full and half marathons, he also competes in shorter races, which he says he enjoys because they allow him to test his speed.

Zackerman, a senior accountant at AK Steel, said he finds similarities in the sport of running and the accounting profession, specifically the importance of endurance and sticking to your goals.

“I train in a group where two of the people also are accountants and we have a demanding job, there’s no question about that,” he said. “It’s seasonally demanding, and when you’re out on the road running a 20 miler in the middle of summer, sometimes the job stress can be somewhat similar and you know there is no quitting. You’re going to get it done just like you do in your training. That whole mindset translates really well to the work world.”

Zackerman is taking a break from full marathons because of a stress fracture in his knee, but said he plans to eventually come back to running full marathons.

He said his best experience at a race was at the Indianapolis Monumental Marathon. A young woman ran up beside him asking for help in getting to the finish line because it would be her last marathon. She told him she was a mother of a young child and wouldn’t be able to devote the long hours running a full marathon requires anymore. He said they chatted the last mile or so to the finish line and she made her goal time by 25 seconds.

“She turned and hugged me and disappeared into the crowd,” Zackerman said. “That epitomizes what the sport of endurance racing is all about. You’re out there to do your best but you can help people, too.”