Early in his career Michael Papadakis, CPA, didn’t have the goal to become a CFO, but he did recognize the importance of being open-minded in his career.

That philosophy has helped him reach the position of Chief Financial Officer at his alma mater, The Ohio State University. 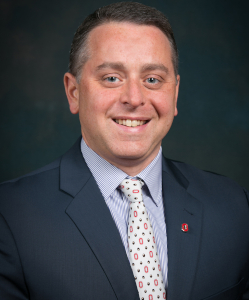 “If you asked me coming out of school as an undergrad if I thought I’d be university CFO in 20 years, I would have thought you were crazy,” he said.

Papadakis graduated from the University of Cincinnati with a bachelor’s degree in accounting. He went on to work in public accounting and said he originally wanted to be a partner. He enjoyed the work, but realized it wasn’t for him long term. He went back to school at the Fisher College of Business at OSU.

He met his wife at Fisher, and then moved to Cleveland to work in investment banking. He said he eventually realized he wanted to be the CFO of an organization, and then an opportunity came with Ohio State. He said the fact he and his wife are passionate OSU alums impacted his decision to return to Columbus. He was hired as vice president and treasurer in 2011.

Papadakis held the interim position of senior vice president and CFO for the past year and is looking forward to holding the title permanently.

“Sometimes the ability to make real change in the interim role can be more challenging because people are wondering how long you’ll be there and might be reluctant to make changes,” he said. “But now I can pick up the pace and move forward on certain things.”

He said he enjoys the wide variety of responsibilities he’s tasked with, especially in figuring out how to help different areas of the university.

“What I enjoy the most is seeing the impact on some of the things we’ve done at the university, regardless of what it is,” Papadakis said. “It might be some new strategic initiative that saves money over time and redeploying that into student scholarship or financial aid. Or, working on a new IT implementation process and seeing the long-term benefits. It can be harder to see, and other times it’s obvious, but I love seeing the impact of the things we’re working on.”

The CPA credential has helped him grow in his career, he said, and given him opportunities to explore different areas.

“If you know the nuts and bolts of accounting and how they fit together from a financial statement point of view, it’s a lot easier to transition into other strategic roles,” he said.

Reflecting on the trajectory of his career, Papadakis acknowledged that it’s not always necessary to have the perfect job, especially in the beginning.

“Things will change, and you should try to get as much experience as you can in those roles even if it’s not where you want to be long-term,” he said. “Be open-minded and roll up your sleeves and dig into it. You career is a marathon, not a sprint, and you have to be ready for those opportunities.”