Raising money for charity is admirable, but Joe Compton’s connection to the Leukemia & Lymphoma Society runs deeper than that: he credits the organization for helping to save his life. 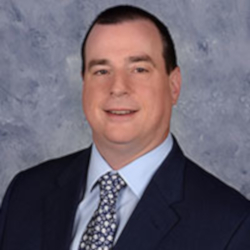 “Part of the reason I’m still alive today is because of the research these people were doing 20 years ago,” he said.

Compton, a principal at Skoda Minotti in Cleveland, was diagnosed with lymphoma in 2014 shortly after his sister was similarly diagnosed. They are now both in remission, and Compton has focused his efforts on giving back.

He’s been nominated to compete in the LLS-sponsored fundraising competition for Man & Woman of the Year. The campaign aims to support blood cancer research, and the man and woman who have raised the most funds during the 10-week campaign are named Man or Woman of the Year in their community.

“I know people in my position have done this in the past for me, and if I’m successful at this I hope I’m helping someone in the future,” he said.

Compton described the process so far as “a lot of fun,” and said this is the first time he’s been involved with a charity focused on health issues. Compton said he’s made philanthropy a priority throughout his career: he’s been involved with various Catholic charities, The Jewish Federation of Cleveland and currently sits on the board of the Diversity Center of Northeast Ohio.

He is also a national director of the Western Golf Association Evans Scholars Foundation, which offers full-ride college scholarships to high school caddies who demonstrate substantial need along with other qualifications. He said he’s experienced many fulfilling moments over the years because of his involvement in charities, but one that stands out is when the caddies are awarded the scholarships.

His goal is to raise enough money to make a sizable contribution to research efforts and to raise awareness of lymphoma and leukemia.

“I’ve been so lucky with my career and in my life and I’ve never wanted for anything,” he said. “The only way to get meaning out of my life is to give back to others. When you’ve had so many good things happen in your life you want to give it back and pay it forward.”

Donate to Joe Compton’s Man of the Year efforts here.